Before the excitement of the VIP guest, the Northlake Woods PS students started the day being guided through two activities, in a room of the new Google building, by some of Google’s computer engineers.  In one of the activities, they were taught coding by using Play-Doh as a controller and navigating a screen robot through various mazes. They also learned how to use the computer and a 3D printer to capture and create a 3D selfie.

The students were fascinated by the new Google building as an amazing place to work, referring to the bright colours, the old building feel with the modern fixture details, the comfortable eating booths and food services, and the unique way the building seems to engage visitors into this Google culture.

Prior to the opening ceremony, the small room that the Grade 7 students were working in quickly filled with media, local dignitaries and the Prime Minister. As Trudeau came in, he approached the students and engaged in conversation – what a tremendous experience! The students later commented on how friendly and personable the Prime Minster was, and that he is a real person with a sense of humour.

The Grade 7 students quickly became Google’s Junior Coders for the day and confidently answered reporter questions and demonstrated all that they had learned.

After the 3D selfie, the Google team handed out a brand new product that had never been tested by any students in Canada before that day – it’s called the Google Cardboard. The device serves as goggles that create a virtual reality environment for the viewer. As the students sat and spun in their seats, Prime Minster Trudeau then lead them on a virtual tour of the parliament buildings using the new technology – he even had them pause for a moment as they passed by the portrait of his father, a former Canadian Prime Minister.

The final portion of the morning involved a formal presentation to the public and media. Using the coding knowledge she had learned in a workshop earlier, Natasha helped guide the Prime Minister as he navigated a screen robot through a maze to activate the official opening confetti canons. She was fortunate enough to spend time before the formal presentation with Prime Minster Trudeau to prepare for the opening ceremony. In the moment of a lifetime, she sat front and center with the Prime Minister of Canada, Minister of Innovation, and other federal, provincial and local dignitaries. Northlake Woods PS is extremely proud of how Natasha conducted herself in this role, and as she represented the youth of Waterloo Region among the other dignitaries present.

The staff at Google were helpful and made the students feel welcome and at ease. Their excitement in technology and exploring its potential was evident and seems to have inspired the students to explore some of the possibilities that exist in the expanding world of computer programming, technology and workplaces as cool as the new Google Canada building.

Here are some comments from the Grade 7 students:

“The whole event was eye opening and showed me an insight into the life of a young coder that I didn’t have before.” – Maeve

“This was such a different experience, and having the Prime Minister there, took it to a whole new level of intensity.” – Zach

“Being in the building was fun; it seemed so creative and extravagant!” – Eliana

“It was cool to meet the leader of our country, and it was the first time I got to visit the parliament buildings (even if it was virtually).” – Noah 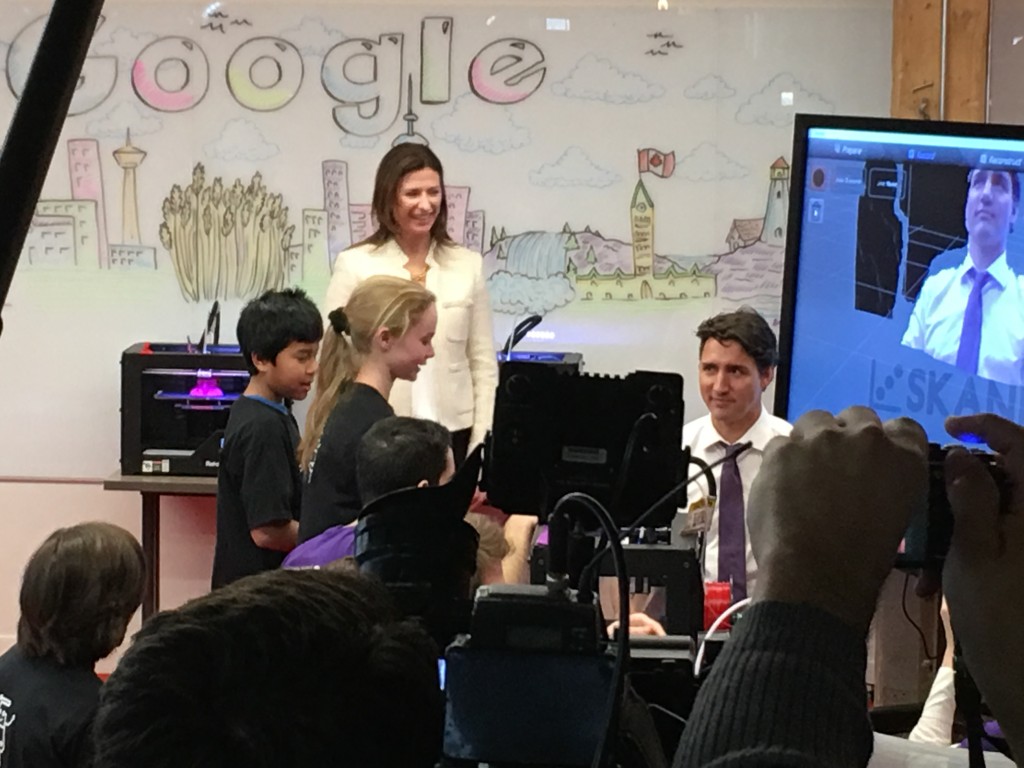 The Google Cardboard product was a new product Northlake Woods PS students got to try for the first time.